Those little plastic cookery sets were very much a part of my daughters’ childhood toys. It was a fun way to give them an idea about how their mom or household helper worked in the kitchen. I also remember enrolling the kids to the McDonald’s play camp every summer so that they’ll know how it […]

The post A site for kiddie food & cooking games appeared first on annalyn.net.

When you’re hosting an event, there’s a drive to do something that will set you apart. Whether this means finding musical acts that will inspire or finding performances that will leave people’s hearts racing wildly: you have the power to change how they view your event. These are the top four exotic live acts every […]

The post 4 Exotic Live Acts to make your next event special appeared first on annalyn.net. 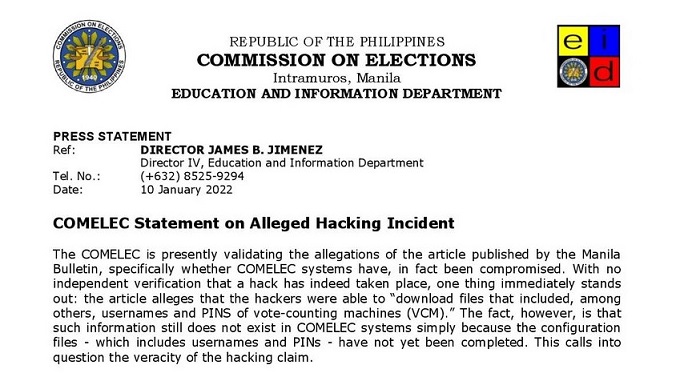 So many things were not quite right in the Manila Bulletin news report about the alleged hacking of the Commission on Election (Comelec) website. The quick response from Comelec Spokesperson James Jimenez foiled further spread of that suspicious report.

Jimenez took the bull by its horn, a valuable lesson not only in fighting disinformation but also in preventing something from becoming a problem, or a crisis.

The report came to our attention late afternoon of Monday, Jan. 10. It said “sensitive voter information may have been compromised after a group of hackers was allegedly able to breach the servers of the Commission on Elections (Comelec), downloading more than 60 gigabytes of data that could possibly affect the May 2022 elections.”

“This was discovered by the Manila Bulletin (MB) Technews team, which found that the hackers’ group managed to breach the system of the Comelec last Saturday, Jan. 8, 2022, and download files that included, among others, usernames and PINS of vote-counting machines (VCM),” the MB article continued.

The story had the byline “MB Technews,” indicating that not one person but members of the newspaper’s technews team worked on the story.

The report triggered concern because this was not the first time that government agencies’ websites, including Comelec’s, were hacked. And there’s the approaching May 9, 2022 elections that everyone looks forward to as the campaign heats up even as the Omicron variant of COVID-19 rampages, setting new record levels of infections.

Our fact-checkers’ training tell us to immediately do lateral reading, get out of the Manila Bulletin site and check if other news media sites carried similar reports. Nada!

We got Jimenez’ statement, which said they were “validating” the news report. He did not dismiss the report outright but pointed out red flags.

“With no independent verification that a hack has indeed taken place, one thing immediately stands out: the article alleges that the hackers were able to ‘download files that included, among others, usernames and PINS (personal identification numbers) of vote-counting machines (VCM).’The fact, however, is that such information still does not exist in Comelec systems simply because the configuration files – which includes usernames and PINs – have not yet been completed. This calls into question the veracity of the hacking claim,” Jimenez noted.

Further, he said: “ As for the rest of the allegations made, please note that the article offers scant substantiation for its assertions despite claiming that the authors had ‘verified that there was an ongoing hack.’ Indeed, the article does not even offer proof of such verification.”

As expected, several theories and comments already came out on social media. There were those who suspected those loyal to President Rodrigo Duterte of sabotaging the May 9 elections for a No-EL scenario to allow him to stay in Malacañang beyond June 30, 2022.

The seed of this suspicion could have been the proposal of Rep. Aurelio Gonzales Jr. (Pampanga, 3rd district), filed on Jan. 7, for longer term of office for the president, members of the House of Representatives and local officials on the argument that six years for a president and three years for House members are “too short.”

Later in the evening, we chanced upon this Twitter account @KimInar by someone who described herself as a “world traveler, lawyer, critic, hard-working, and independent woman.”
Earlier, @KimInar was at a Twitter party with the theme “Protect our Vote” and hashtag #ComelecHacked. It carried the Manila Bulletin headline report.

@KimInar tweeted: “Can we still entrust our vote with the Comelec?” and encouraged others to “RT.”

Jose@edsaisidro wrote: “So if not for the MB Technews team, we wouldn’t have known this hacking incident? Talagang nanakawin ulit ang mga boto natin?”

Did the Manila Bulletin news report have something to do with the petitions to disqualify presidential candidate Ferdinand “Bongbong” Marcos, Jr. being heard by the Comelec First Division?

Comelec Commissioner Rowena Guanzon started the hearing Jan. 7, Friday. Marcos Jr. did not attend. His lawyer said he was not feeling well and that he was exposed to persons who tested positive of COVID-19.

Guanzon announced on Twitter: “On or before Jan 17 the @COMELEC First Division will promulgate its Resolution on the DQ cases versus Marcos Jr. If not too risky, we will read it in the Session Hall, on live stream.

This column appeared also in: 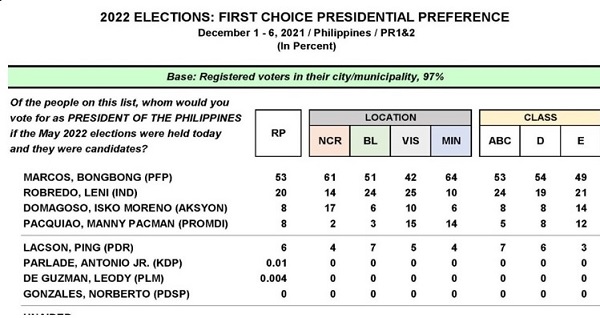 Latest election surveys showed that if elections were held today, Ferdinand “Bongbong” Marcos Jr. would be the 17th president of the Republic of the Philippines.

It’s a nightmare in the making for those who have experienced the horrors of martial law and those who know how democracy was distorted and crushed during the Marcos authoritarian regime. Will the 50th year of the declaration of martial law on Sept. 21, 2022 be declared a national holiday by the Philippine president by then, the son and namesake of the man who signed Proclamation 1081 two days prior to its announcement, asked JB Baylon, columnist of Malaya Business Insight and VERA Files.

Pulse Asia’s December 2021 nationwide survey showed Marcos Jr. was the choice of 53% of Filipinos if elections were held now. Other candidates trail behind, with Leni Robredo, the political opposition’s muse, as the choice of 20% of the respondents; Manila Mayor Francisco “Isko Moreno” Domagoso, 8%; boxing legend and Sen. Manny Pacquiao, 8%; and, Sen. Panfilo “Ping” Lacson, 6%.

Never has a candidate in the post-1986 people power revolution elections reached that high number consistently in pre-election surveys. Not even Benigno “Noynoy” Aquino III, who was catapulted into the 2010 presidential race by the massive public sympathy over his mother’s death a few months earlier. He led in all the poll surveys at 40-plus percent, never reaching 50%.

A favorite elections poll story is the come-from-behind feat of then-mayor of Davao City, Rodrigo Duterte, who was No. 4 among presidential aspirants five months before D-Day. The SWS December 2009 survey had then-vice president Jejomar Binay and Sen. Grace Poe preferred by 26% of the respondents, followed by Liberal Party standard bearer Manuel “Mar” Roxas with 22%. Duterte had 20% support and then-senator Miriam Defensor-Santiago, 4%.

Duterte’s national popularity manifested only in the April 2015 surveys. Pulse Asia’s polling sponsored by broadcast giant ABS-CBN two weeks before the May 9, 2016 elections had Duterte on top with 33%. He went on to win the elections with 16,601,997 (39.2% of votes cast).
The vice-presidential race was also a come-from-behind story with Robredo winning over Marcos Jr. by 263, 473 votes.

The come-from-behind stories are reminders that many things can happen between now and May 9, 2022. Can Bongbong Marcos continue expanding his numbers and convert them successfully to actual votes come Election Day? Or has he peaked this early and go downhill from now?
Bongbong Marcos’ advisers, having their bitter lesson in the 2016 elections experience, may be doing everything to make sure that their candidate maintains the lead.

There are calls for the opposition to unite behind Robredo against Marcos Jr. Maybe because his running mate is President Duterte’s daughter, Bongbong is identified with the current administration and his victory would be a continuation of Duterte’s policies: pro-China, low on human rights, etc.

Duterte’s badmouthing of Bongbong Marcos didn’t seem to have affected the latter’s popularity. This confirms two things: Duterte’s lame duck status (who gives importance to someone who will be out of power in a few months?) and that more than 50% of Duterte’s social media warriors, credited for his 2016 election domination, belongs to the Marcos online army.

It is doubtful, however, if Moreno, Pacquiao and Lacson would withdraw from the race. And granting they would, it is doubtful if the votes would go to Robredo, especially Moreno’s and Pacquiao’s supporters. They could even be won over by Marcos Jr.

This is one situation where Robredo’s strategists should think of the divide and conquer strategy -encourage Pacquiao to stay in the race to deprive the Bongbong-Sara full dominance of Mindanao. Marcos has the edge in Metro Manila over other candidates with 61% (Pulse Asia survey). If Moreno withdraws, his 17% might even go to Marcos.

The next surveys should be interesting. Leni’s graph has been a steady upward climb. Bongbong is clearly on top now. Where does he go from there?

Radenta Technologies Inc., one of the country’s premier IT solutions integrators has launched its fortified Global Reconnaissance Intelligent Defense System (GRIDS) designed to elevate the security posture of any client.  Radenta’s fully managed security operations allow organizations to benefit from using the most advanced SIEM technology, without the cost and complexity of owning and administering a SIEM […]