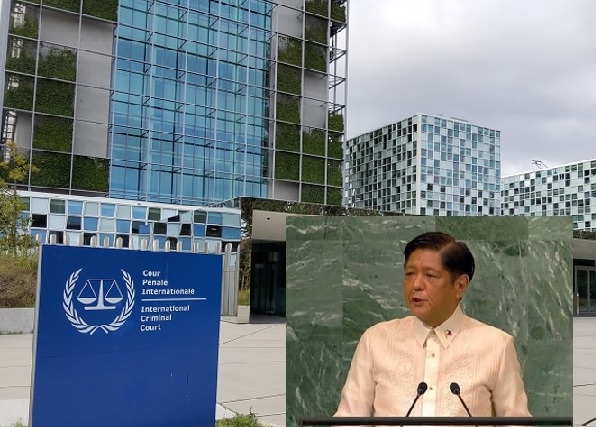 If you listen closely to Justice Secretary Jesus Crispin Remulla’s strident reaction to the decision of the International Criminal Court (ICC) to resume the investigation into the killings related to Duterte’s war on drugs, he didn’t completely rule out allowing the ICC to come into the country.

“Definitely I do not welcome this move of theirs and I will not welcome them in the Philippines unless they make it clear that they will respect us in this regard,” he said in a press conference.

He added: “I will not stand for any of these antics that will question our status as a sovereign country. We will not accept that.”

Remulla knows his international law. He knows that a state’s sovereignty – the supreme right of the state to command obedience within its territory – allows it to enter into treaties. We exercised our sovereign right when we signed the Rome Statute, which established the ICC, on Dec. 28, 2000 and ratified it by the Senate on Aug. 30, 2011. Our accession to the treaty took effect on Nov. 1, 2011.
We knew the provisions in the treaty.

The Philippines’ withdrawal from the ICC initiated by former president Rodrigo Duterte took effect on March 17, 2019.

Last Jan. 26, ICC’s Pre-trial Chamber I (Court) granted Prosecutor Karim Ahmad Khan’s request to resume investigation in connection with the charge of crimes against humanity arising from the killings that happened during a specific period in Duterte’s war on drugs.

It is understandable that Remulla would be offended by the ICC’s decision and the reason that was given: it doesn’t believe the Philippine government is “undertaking relevant investigations that would warrant a deferral of the Court’s investigations on the basis of the complementarity principle.”

It means that the ICC believes that the Philippine government is “unable or unwilling” to prosecute those responsible for the killings, the estimate of which varies from the government’s number of 6,000 to the human rights groups’ more than 20,000.

In their insistence that the country’s judicial system is functioning and ICC’s probe is unwelcome, Remulla’s DOJ as well as during the term of Menardo Guevarra (now solicitor general) points to convictions of policemen involved in the 2017 killings of teenagers Kian de los Santos, Carl Arnaiz and Reynaldo de Guzman.

The ICC, however, is not easily impressed by the “deliberate focus of proceedings on low-level or marginal perpetrators.” It wants to make sure that national investigations or prosecutions focused “on those most responsible for the most serious crimes committed.”

It is noted that Remulla added a conditionality in his public statement on not welcoming the ICC investigators: “… unless they make it clear that they will respect us in this regard.”

There is no reason for Remulla to be worried about it. Since the ICC does not have its own police force, it relies on the cooperation of States and international organizations to arrest and surrender the persons they are investigating.

President Ferdinand Marcos Jr. has not said anything about the latest development from the ICC. During the election campaign, he said that he would only allow ICC probers to come in as tourists.

Many things have changed since then. He is now president, made possible by an alliance with Sarah Duterte, the former president’s daughter.

In the seven months of his presidency, he has been working hard in selling the country as a stable and dynamic investment area. He has impressed the international community as a leader far decent from his predecessor.

In his speech at the 77th United Nations General Assembly last year, he declared: “We need to reaffirm the wisdom of the founders of our United Nations. This means transcending our differences and committing to ending war, upholding justice, respecting human rights, and maintaining international peace and security.”

Surely, he won’t undo all those gains by not allowing the ICC to investigate what has been an extremely traumatic experience for tens and thousands of Filipinos.

Segunda Mana is Caritas Manila’s showcase of donated goods which the public can buy from. Call it ukay-ukay if you may, but the program has been successful since its inception 15 years ago. The organization has lined up plans to open more Segunda Mana outlets nationwide as well as bring back its celebrity backed events. […]

The nine-episode first season of the HBO Original drama series The Last of Us premiere last January 16 on HBO Go. It takes place 20 years after modern civilization has been destroyed. Joel, a hardened survivor, is hired to smuggle Ellie, a 14-year-old girl, out of an oppressive quarantine zone. What starts as a small […]

The post ‘ The Last of Us’ now showing on HBO GO appeared first on annalyn.net.

Gold jewelry has always had a special place in many people’s hearts, symbolizing wealth and status throughout history. Throughout the ages, gold has become increasingly seen as more than just an item to be worn or admired; some now view it as an important method of investing money because of its potential to appreciate over […]

The post Why You Should Consider Investing in Gold Jewelry  appeared first on annalyn.net.

The attendance of President Ferdinand Marcos Jr. in the 2023 World Economic Forum (WEF) from Jan. 16 to 20 in Davos, Switzerland was the ultimate redemption for him and his family and a stinging rebuke to the Filipino people.

In answer to the question of WEF President Børge Brende on how has his seven-month presidency been, Marcos replied that it was “pretty much expected” because, he continued: “I have the advantage of having spent years watching my father being president so I had a very good idea of what entailed. Now, of course it’s different from a son watching his dad doing his job than you yourself doing that job. It’s like I’m in the same setting but playing a different role but ,at least, I know what needs to be done. I have a fair idea how it used to be done anyway and so I have models that I can follow, templates that I can follow.”

He was also asked if becoming president was part of the plan when the Marcos family was preparing for their return to the Philippines after they were driven out of power in what is dubbed as a “people power” revolution in February 1986.

Marcos said that when he was still in school, he didn’t want to go into politics. But after the family was allowed to come back in 1991 (Marcos Sr. died in Hawaii on Sept. 28, 1989), they realized that they can best defend themselves by going into politics. “Somebody had to enter politics and to be in the political arena so that at least not only (for) the legacy of my father but even our own survival required that somebody go into politics.”

He described the six years living in exile as a “very trying time.”

“Those were dark days for the family, and I dare say, even for the country,” he said.

Brende lapping up the Marcos narrative is appalling to Filipinos who have not forgotten the discovery of secret accounts holding some $800 million stashed in six Swiss banks from among the documents they left behind in Malacañang.

In a show of support to the Filipino people, the Swiss government did something unprecedented – froze the accounts identified by the Philippine government under then president Cory Aquino as belonging to Marcos and members of his family following attempts to withdraw traced to them while in exile in Hawaii. In justifying the “freeze,” the Swiss bankers association said that “banking secrecy is not absolute and does not protect criminals.”

The accounts frozen were only those identified by the Philippine government. It is believed that there were many more accounts that the Marcoses continued to have access to up to this day.

The Presidential Commission on Good Government, created in 1986 to recover the wealth stolen by the Marcoses from the Filipino people, has placed the amount to over P25 billion.

That’s why we are turned off by the snow job that happened in Davos last week even as we acknowledge the hard work that the president did to attract investments to the country.

But no matter how sophisticated, how extensive the propaganda machinery is, truth will find its way to surface. 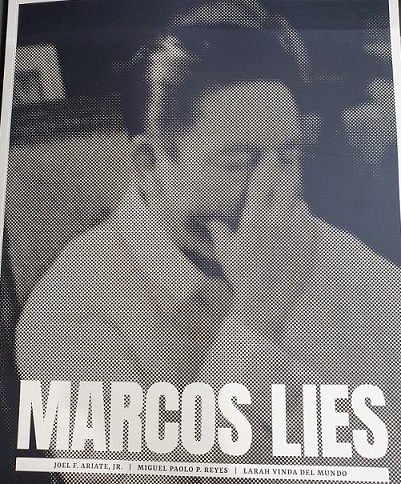 “Marcos Lies,” a compilation of 31 essays by researchers from the University of the Philippines Third World Studies – Joel F. Ariate Jr., Miguel Paolo P. Reyes and Larah Vinda Del Mundo – discusses in detail the various lies that the Marcoses have parlayed to the public in pursuit of power and plunder. One of the stories (Ferdie and Meldy’s House of Love, Lies, and Loot) talked about the “other Mrs. Marcos” in what was supposed to be the ideal marriage of Ferdi and Imelda Marcos. There was also about the “Who is Your Hero” survey that angered Imelda Marcos.

Marcos was a master of secrecy. There’s an article on how Marcos was able to keep the declaration of Martial Law a secret, as well as the tricks he had to resort to in order to hide his illness.

The articles in the 1.2 kilogram-tome are supported by documents – news reports and diplomatic cables, transcript of congressional investigations and other materials, various fragments of data that, when put together, offer a clear view of the truth that the Marcoses have either hidden or twisted. Some of those articles have been published in VERA Files.

The request for reservation for a copy of “Marcos Lies” is quite long, indicating the interest by many to bring to light what really happened during the dictatorship – the darkest period in the history Philippine democracy.

When Marcos won the election last May, one of the foremost questions in the minds of many was, “How will the Edsa people power revolution be observed under his presidency?”

His reply to Brende is a hint. Let’s see in three weeks.